You know when a news story comes around that just makes your stomach fall out of your body? The more you read about it, the more ice cubes fall into your heart. To say I am disgusted by the Brock Turner rape case, is a drastic understatement.

At this point, I think everyone with internet access knows who Brock Turner is, what happened at a Stanford party in 2015, and more importantly, what Judge Aaron Persky did to women everywhere. I am never a person to climb on a soapbox, but this was just incredible to me.

Our society is a rather scary place to be a female. I keep a can of bear spray and a pepper spray gun by Kimber in my car, and am fully prepared to rip throats out with my teeth if I’m attacked. These are precautions that I have to take because sometimes men can’t keep their hands to themselves. This is how I was raised; to always be on high alert, never park anywhere too dark, and be suspicious of strange men.

The victim was violently raped on the ground behind a dumpster. On the ground. Behind a dumpster. Brock Turner ran away (like any guilty party would) and was tackled by two witnesses. After apprehending the rapist, they felt it necessary to check the vitals of the girl. They were afraid she was dead because she was so still. When talking to the cops, one of the witnesses cried while describing what he saw.

An incredibly powerful letter was written and read by the victim in court. It should be required reading for everyone. I will never demand anything of you, but I really must insist you read that letter. It will haunt you, might make you cry, but it’s important. Her words won the nation, world, and the jury. Brock Turner was found guilty of three felonies. He was found guilty by a jury of his peers. They suggested a maximum sentence of 14 years in prison. That should be enough, right? The final nail in the coffin? Wrong.

The judge, Aaron Persky, decided this sentence would be too harsh for CONVICTED RAPIST, BROCK TURNER. Apparently Brock Turner is an athlete, a swimmer specifically. Apparently he’s very good. Apparently he had dreams of going to the Olympics (USA Swimming has banned him for life though, so no more competitive splish splash for him). A 14 year sentence would have a “severe impact” on dear ol’ Brock. So the judge reduced the sentence to an insulting 6 month stint in a county jail. Severe impact, huh? Were they afraid that something like…oh, I don’t know…RAPE would have happened to him in a prison? Something that his own father described as “20 minutes of action” in a letter he addressed to the court. 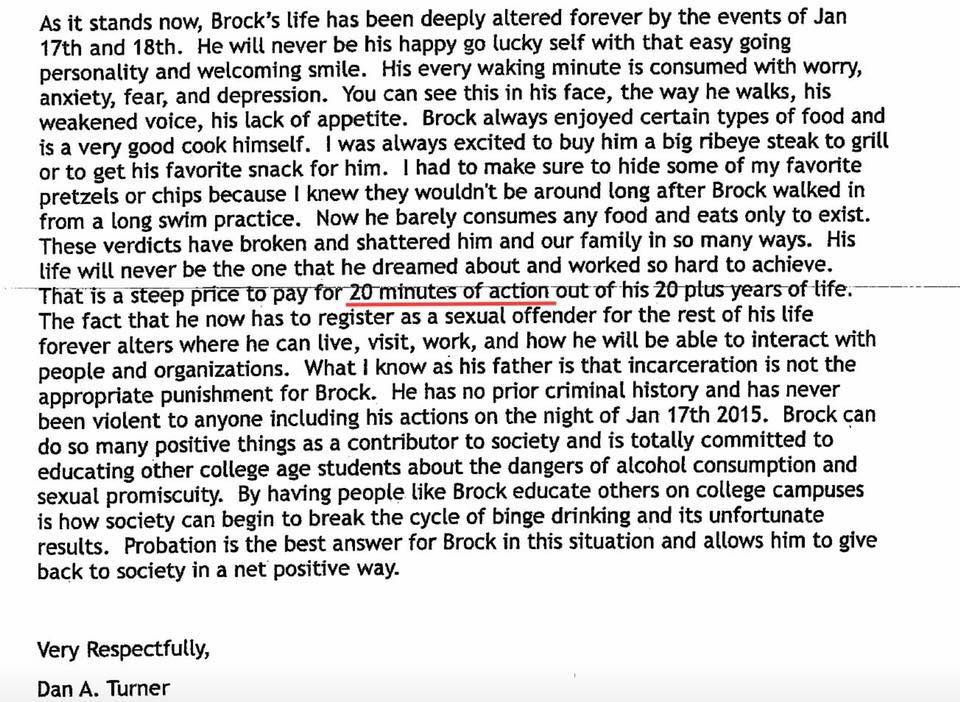 I don’t know who I want to kick more. Dan Turner? Brock Turner? Judge Aaron Persky? All three at once with a steel toed boot? Rape is not alcohol’s fault, it is not clothes’ fault, it’s not promiscuity’s fault, and it certainly isn’t the girl’s fault. I have been impressively drunk in my day (sorry, mom and dad), and I have done so without attacking anyone! That Brock Turner’s dad seems proud that his son has only committed one “20 minute” rape in his “20 plus years of life” is appalling. It does explain where Brock learned this behavior though.

Brock Turner was always presented in an oddly kind light. He was described by Washington Post in their article as an “All-American swimmer.” They went on to wax poetic about his Olympic dreams and desire to be a surgeon. What the what…? It wasn’t until a year after the initial arrest that a mugshot was even released. We have it now. Pretty big difference from what they kept showing us.

It makes you want to run into the street and slap some people doesn’t it? A guy was found guilty of three felony counts of sexual assault, and in the last moment he was more or less let off. That sort of thing isn’t supposed to happen, it’s just not. There is something we can do though.

Judge Aaron Persky messed up. Big time. He pulled this little stunt during an election year. Sadly, no one is running against him, but we can have Aaron Persky recalled. The judge gave the jury, victim, basic human decency, and the friggin’ judicial system the big ol’ finger. This is far from just a gender issue. Rape is inexcusable, but it’s the actions of the judge that have made this case a global outrage. He has absolutely no place in a courtroom.

Sign the petition to recall Aaron Persky and fill out this form. All the information you need is right here:

Name of Judge: Aaron Persky
Court: State Bar
County: Santa Clara
Name and case number: State of California vs. Brock Allen Turner Case #B1577162
Please specify: Appearance of bias toward a particular class: Persky sentenced fellow alumni and athlete of Stanford university to an unusually lenient sentence of 6 months for a unanimously guilty verdict on three counts of sexual assault, despite Mr. Turner showing no remorse and being caught in the act. Inappropriate comments on the bench: “A prison sentence would have a severe impact on him (Brock Turner)” in relation to why this convicted rapist would serve such a short sentence.
Present parties include: Brock Turner/Aaron Persky/Jeff Rosen/Mike Armstrong/Emily Doe/others